​To all my fans and viewers,

Most of you are probably aware that in the last few years, social media companies have become increasingly hostile towards a range of content creators considered too far outside the confines of mainstream thought. I’ve always feared that Think Anomalous would become the target of this new Silicon Valley censorship, and now I’m practically certain that my worst fears have been realized.

After an explosion of views and new subscribers in the fall of 2018 (mostly due to our video on the Ark of the Covenant going viral), the growth of this channel has slowed dramatically. It took another dive in 2020, bringing the channel down to a level of performance that I haven’t seen since my first few months on YouTube. Even as recently as January 2020, we were still regularly getting 20 or 30 new subscribers a day. In the last few months, however, it’s been rare to get more than 10 a day, and there are now many days when we lose more subscribers than we gain. On September 29, 2020, for example, we had a net LOSS of 11 subscribers. We lost 5 more subs on October 16, and 9 on Oct 22. Since April, we’ve been having these ‘negative days’ with increasing frequency.

The second graph in the attached image shows our daily subscribers from August 10 to December 2. See how many times the total dips below zero. In November alone, there were 10 days where we lost more subscribers than we gained. That’s about as many negative days as we’ve had in the entire four years prior to January, 2020. All of this in conjunction with a steady decline in views (see the third graph), and of course, ad revenue.

It’s been clear for a while now that YouTube has been limiting the visibility of our videos, but now I’m certain that YouTube, or some other party, is actively unsubscribing people in an attempt to keep this channel from growing. I’ve been checking our subscriber count multiple times a day for the last few weeks and seeing this happen in real time. Every time our total rises, it drops back down again, often by 10 or 15 at a time. The “subscriber change” total that YouTube displays drops with it, leaving no trace of the theft, since YouTube does not allow you to track your total subscribers over time.

The fact that YouTube is deliberately countering all of our successes is incredibly disheartening, especially considering the fact that Think Anomalous is still operating at a net financial loss, and makes a pittance in ad revenue. Now more than ever, it is painfully obvious that YouTube will never allow Think Anomalous to grow to the point of financial self-sufficiency - not through ad revenue alone, anyway - and it will never allow us to reach an audience beyond whichever maximum it’s confined us to.

We are currently working on uploading our videos to other platforms, and sharing our content on alternative social media sites. We’ll keep our videos up on YouTube for the foreseeable future, but seeing as how the channel cannot thrive in the current environment, we’re forced to concentrate our efforts on platforms that do not cut their own creators off at the knees.

I will never give up on Think Anomalous, and I promise to do everything that I can to keep making videos, and to continue growing our reach. But I will need your help to fight the censorship machine. Now is a great time to go to YouTube and make sure that you’re still subscribed. Also, make sure that you click the bell beside the subscribe button so that YouTube notifies you when new videos come out (even though they frequently fail to do so, as many of you have been telling me). If you discover that you’ve been unsubscribed, please let me know in a comment.

Please share your favourite videos to all your social media accounts, and tell all your friends and family that you think might be interested in our content. And to all of those who are able to do so, please become a Patron today. Becoming a monthly donor on Patreon provides us with a steady stream of revenue that we can count on, regardless of how much we’re being suppressed on YouTube. It is absolutely the best way to help this channel reach the level of success that it deserves. As a way to thank our Patrons, we’ve recently added more tiers and many new rewards, including access to an exclusive monthly update video and a vote in polls on future video topics.

Finally, please speak out about the assault on independent content creators to everyone that you know, and complain about it to YouTube. And to our American friends: please write to your elected representatives and tell them that you’re outraged by the way that social media companies are manipulating - and often, outright censoring - the flow of information online. Please join me in fighting for this channel, and for a free and open discourse on anomalous phenomena. 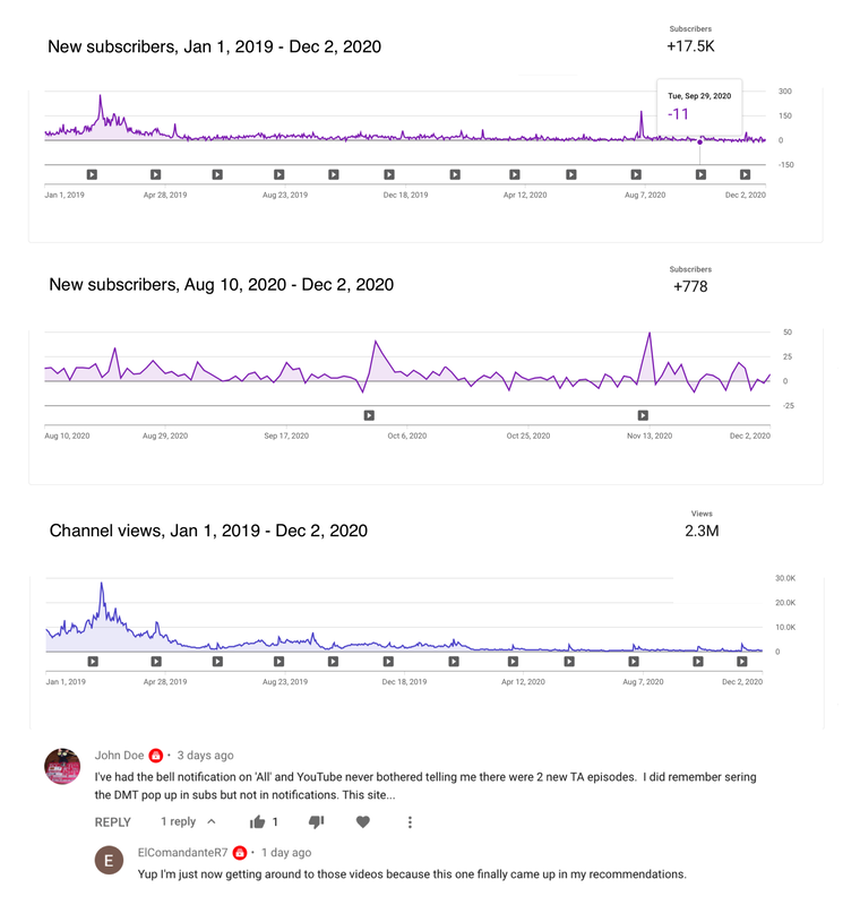