John Horgan recently wrote an article for Scientific American in which he argued that today’s consciousness research is devolving into pseudoscience. (1)  Horgan took a monistic, materialist stance on the philosophy of mind, which he made clear enough, but his criticism of opposing views was muddied by a heavy reliance on a particular word that’s become increasingly common in the skeptical literature.

“Woo” or “woowoo” is used everywhere as a catch-all pejorative for unorthodox metaphysical views, and the debate over anomalous phenomena is suffering for it. Debunkers’ heavy reliance on vaguely derogatory words like “woo” comes at the expense of more precise, critical terminology, and it’s confusing tongues in the debate over anomalistics. Although it’s meant as a general criticism of unscientific methodology, “woo” is often used as a substitute for better articulated critiques, leaving those whose work has been criticized with no way to respond to the attack, or even understand the controversy.

Woo is not a scientific term, but a loaded, catch-all smear tossed around to tarnish the credibility of all minority beliefs in science. Woo, and all words like it, should be unwelcome in science journalism and debate.

What does “woo” mean, really? How can we define it, and how can we distinguish what it denotes from more rigorous scientific concepts?

As Horgan explains, woo is the kind of “metaphysically flakey” verbiage that proponents of pseudoscientific theories employ to persuade audiences of their claims. Horgan opposes woo to “serious suppositions,” and helpfully explains that the term can be used as both an adjective and a noun.

After some research, I found the definition of “woo” (or “woo-woo”) to be frustratingly elusive. The skeptic’s dictionary defines it as referring to “ideas considered irrational or based on extremely flimsy evidence or that appeal to mysterious occult forces or powers.” (2)  It is a “derogatory and dismissive” term synonymous with “nonsense, irrational, nutter, nut, or crazy.”

A dictionary quoted in the definition defines it as “concerned with emotions, mysticism, or spiritualism; other than rational or scientific; mysterious; new agey.”

RationalWiki defines “woo” as “dressing itself in the trappings of science… while involving unscientific concepts.…”(3) while the Collins English Dictionary defines it as “involving irrational superstition.”

A enormous range of ideas could fall within these broad definitions: “irrational,” “new-agey” “mysterious” and “mystical” are all highly subjective terms, and not sufficiently precise for defining categories of analysis.

In practice, “woo” is used about as liberally as its definition allows, and often, the implied meaning can be hard to infer. In Horgan’s article in Scientific American, the word “woo” appears a total of 14 times, including it’s prominent use in the article headline. In every case, however, it is used as the only criticism of the idea, with no supporting argumentation.

Other writers opt for the “woo” label even where they’re able to articulate more specific criticisms. After a public debate, Michael Shermer mocked Deepak Chopra’s phrase, “the womb of creation,” by calling his ideas the “woo of creation.” (4)  Chopra had attempted to integrate quantum mechanics into the philosophy of mind, a task taken up in much the same way by mainstream academics such as Roger Penrose of Oxford University and Stuart Hammeroff at the University of Arizona.

But even after engaging with Chopra’s ideas in a constructive and critical fashion, Shermer chose to label them all as “woo,” as if to suggest that his refutation had rendered them all a pseudoscience. After an earlier debate, Shermer identified in Chopra’s statements the “very embodiment of woowoo” which he boiled down to an excessive reliance on jargon-heavy sloganeering. (5)  Chopra then accused Shermer of using “woowoo” to describe anything expressed in terms he didn’t understand.
​​
Sometimes, debunkers attach the “woo” label to people, rather than to ideas. James Randi puts people like Oprah Winfrey into a broad class of “woo-woo” people who believe things uncritically, and gravitate to the most fantastical explanation for common events. (6) 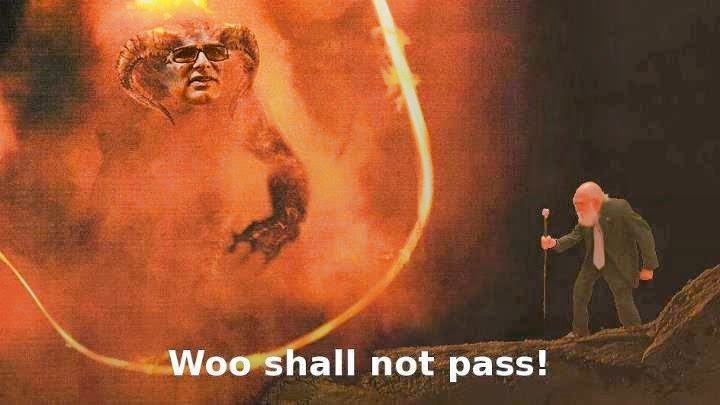 Image courtesy of the James Randi Facebook Page.
So many subjects, people, and ideas have been stuck with the label “woo” that one begins to wonder if it means anything at all. As these uses attest, “woo” denotes a kind of pseudoscientific thinking that is closely entangled with mystical spirituality and other new-age beliefs. Exactly how they violate scientific standards is undefined.


The Problems with Woo

By using the word “woo,” skeptics disguise exactly what it is that they’re objecting to in an idea. These words obscure the real points of contention and make it nearly impossible for those stuck with the label to defend their views. Where does one begin to refute an accusation of woo? What could one say to defend an idea against such an unfocused critique?

In many cases, what debunkers are objecting to is merely the aesthetic value of the content, and not any particular methodological failings. To say that someone believes in something because of its pleasing implications is not the same thing as saying that the idea is epistemologically unfounded; and to say that something is “mystically” orientated, or “new-agey” is not the same thing as saying it’s unscientific. None of these labels help us to flag or articulate violations of scientific methodology.

We cannot simply infer epistemological errors from a claim’s topical connection with mysticism and spirituality. If an idea is unscientific, then it must contain some epistemological flaw that can be identified and articulated in scientific terms. We should use these terms, rather than the more playful ones provided to us by pop culture commentators.

​One could imagine that the label “woo,” also acts as a warning sign in the skeptical community. Once a skeptic labels something as woo, other skeptics know to avoid it, and otherwise free-thinking individuals are discouraged from looking into the topic for themselves. Tossing the “woo” label around does nothing to inform inquiring minds about new ideas, and encourages the blind rejection of unfamiliar concepts.

Labelling ideas as “woo” has become a way for debunkers to dismiss ideas they don’t like while avoiding any meaningful criticism or debate. To rely on this label is to take a short-cut to refuting ideas, without going through the real work of holding them to scientific standards.

“Woo” is used today as “communist” was during the McCarthyist paranoia of the 1950s: as an all-encompassing slur for “othering” ideological opponents. it’s liberal application spreads prejudice and stigma without identifying any specific, actionable problems or violations of scientific methodology. Ironically, although it’s meant to distinguish pseudoscientific ideas from scientific orthodoxy, the “woo” label only helps blur the boundary between the two.

It’s a bit of a cliché now to say that words have power, but it’s especially true in scientific debate. How we label, categorize, and refer to scientific suppositions is central to establishing the fault lines of the debate. When we don’t use scientific terminology in labelling alternative views, we obscure the real points of controversy. This increases the risk of debaters talking past each other for lack of knowledge of the other’s true position. But if properly employed, neutral, scientific language can clarify debate, and keep refutations focused, supported, and debatable.

There is no more room in scientific debate for nebulous words like “woo” than there is for whatever kinds of nebulous ideas it’s meant to apply to. “Woo” has got to go, but so too does the way in which we label it.