Flying Saucers are NOT Real

The famous Canadian UFO researcher, Stanton Friedman, did a documentary in the early 1990s called “Flying Saucers are Real,” an homage to Donald Keyhoe’s UFO classic, The Flying Saucers Are Real (1950). The title seemed as basic and straightforward a statement as any advocate of UFO research could make. But while I’m certainly an advocate for UFO research, I’d like to argue the opposite: flying saucers, or the disc-shaped craft that supposedly carry extraterrestrial visitors from far away planets into our atmosphere, are a figment of our social imagination. They are not real.

Let me be clear: I absolutely believe that there is something wholly unexplained in the UFO data. Unexplained, or Unidentified Flying objects are undoubtedly a part of our reality, and they are more than worthy of scientific interest. I also acknowledge that many of these objects are described as being disc or saucer shaped, and could therefore justifiably be referred to as “flying saucers.” I’m even open to the notion that these “saucers” may be carrying alien beings.

I’m merely trying to argue that the concept of the flying saucer, and all that we assume about its pilots and origins, is a human creation based on a narrow, and arbitrary sampling of global UFO reports. The flying saucer label does not represent the wider UFO phenomenon, and even excludes many of the sightings we’d consider true airborne anomalies. We need to stop using the term, “flying saucer” as a substitute for UFO, UAP, or other more neutral terms, if not drop it from our vocabulary altogether.

So where did this term come from, and why do we use it in the first place? Its history is actually quite short, given the long history of UFOs. People have seen things in the sky they could not explain for at least as long as they've been capable of recording them, but “flying saucers” are a product of the post-war era. Ufologists have discovered that people saw metallic, disc-shaped craft at least as far back as the turn of the twentieth century, but we had no name for these objects at the time, and no obvious category to place them in. As a result, they weren't often recorded, and they weren't widely discussed.

This all changed when an American businessman and pilot named Kenneth Arnold saw what he thought were a fleet of unusual aircraft over Mount Rainer, Washington in June 1947. Arnold described the craft he saw as “delta-shaped,” and claimed only that their movement resembled that of a saucer skipping over water. Media reporting on the incident, however, twisted his words, and dubbed the objects “flying saucers.”

Despite the inaccuracy, the term stuck, and it even spawned a few imitations. Just two weeks after Arnold’s sightings, the Roswell Daily Record broke the infamous story of the Roswell crash. “No Details of Flying Disk are Revealed,” ran the sub headline. From then on, “flying disc,”and “flying saucer” have been treated interchangeably.

The concept of the flying saucer was solidified in the popular imagination after a few key photographs made it to the media: one over New Jersey in 1952, and two from a farm near McMinnville, Oregon in 1950. The McMinnville UFO photographs are among the most famous ever taken, and are considered today as emblematic of the UFO phenomenon. ​ 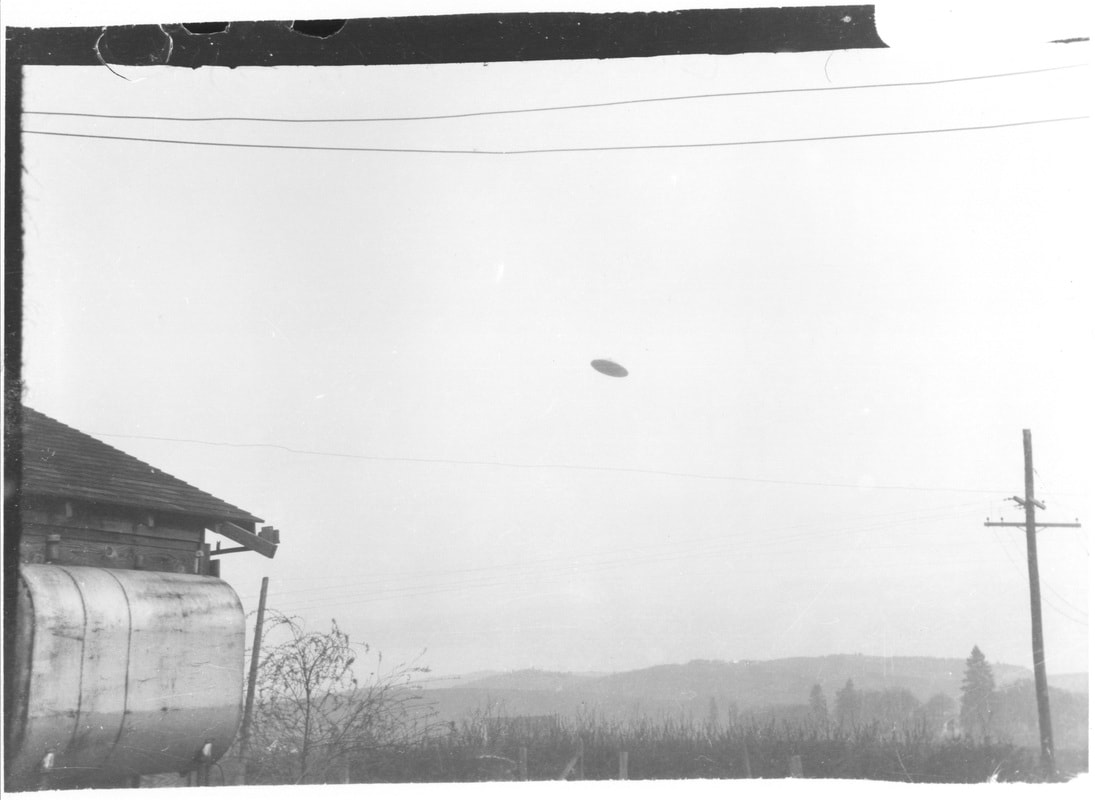 One of the two famous McMinnville UFO Photographs, 1950, now considered emblematic of the greater UFO phenomenon.
The image of the spinning, metallic disc quickly made it ways into popular culture. Flying saucers were featured in magazines and comic books everywhere, and even shown on the big screen. 1951’s landmark science-fiction film, The Day the Earth Stood Still, had the aliens landing in spinning, silver discs. In Forbidden Planet (1956), set in a far away future, even the humans flew flying saucers. The sleek, domed saucer became a symbol of the space-faring civilization, and hung around for a very long time in popular culture.

It’s true, many of the early UFO reports of the late 1940s involved disc-shaped craft (“like two inverted saucers” was a common description), but others didn't. The famous Maury Island sighting of 1947, the same month as Arnold’s, involved doughnut-shaped craft dropping molten metal from their hulls. The craft that supposedly abducted the Hills in 1961 was described as being in the shape of a pancake, with two little wings on either side. And many sightings over the years, including one over an Italian football stadium in 1954, involved cigar-shaped craft hanging motionless in the air. (1)

The term “flying saucer,” and the mythos that came to surround it, was a media creation, one that began in the wake of Arnold’s sighting and never quite went away.


Where have all the Flying Saucers Gone?

That the term lingered for so long is even more surprising in light of the more recent trend towards seeing more complex types of craft. The officers that chased a UFO across two states in 1966 said that the object was shaped like an ice-cream cone, with a lop-sided, rounded top. Betty Cash and two passengers were stopped in the middle of a highway in 1980 by a hovering, diamond-shaped craft. Thousands of people in the Hudson Valley area in the 1980s and 90s reported triangular or boomerang-shaped objects, and in 2012, a mother and daughter in rural Wisconsin saw a brilliant, lampshade-shaped object fly over their neighbour’s home.(2)

Still other sightings involve objects that aren't obviously craft - or objects, for that matter - at all. Dr. J. Allen Hynek’s collected hundreds of reports of “nocturnal lights,” or points of light in the sky hardly discernible from a star if not for their movement.(3)  Many UFO sightings, then and now, fall into this category. To call such a thing a “flying saucer,” or even a “flying craft,” is more than a bit presumptuous.

But even in cases where the UFO is seen within 150m - what Hynek would have called a “close encounter” - the object does not always appear as a structured craft. As early as 1969, the French ufologist, Aimé Michel, published the extraordinary account of a physician in Southern France who watched two glowing discs approach the window of his home and merge into one, seamless object.(4) Last April, a Colombian newspaper editor took photos himself of a shape-changing UFO that flew over Bogota and at times took the form of a figure eight.(5) What sense does it make to refer to these aerial anomalies as “saucers?”

People no longer report saucer-shaped craft with the frequency they once did, and other kinds of UFOs have become more common. It’s to the point now that sightings of traditional discs are vastly outnumbered by sightings of all other types of craft.(6) There is an enormous range of UFO forms, and most of them look nothing like discs or saucers. As part of its regular analysis, MUFON, one of the world’s leading independent UFO research groups, categorizes sighting reports according to the shape of the object seen. Objects are widely distributed across more than 20 different categories of shape, but many more fall into the “sphere” category than any one other. In the month of February 2016, 111 UFOs were classed as “spherical,” whereas only 42 were classed as being in the shape of a “disc.” Other categories include “oval,” teardrop,” “square,” “diamond,” and “chevron.”(7)

Referring to this whole range of structures as “flying saucers” is more than simply misleading: it is locking us into a single mode of thought, and preventing us from exploring alternative answers to the UFO question. When we refer to an unidentified object as a “flying saucer” or a “flying disc,” we are prejudicing the extraterrestrial hypothesis for UFO origins. Knowingly or unknowingly, we are generating the assumption for ourselves and for others, that “genuine” UFOs are physical spaceships from another planet. Even the weaknesses of the extraterrestrial hypothesis notwithstanding, it is unscientific to assume it from the outset, merely as a function of our choice in terminology. If we’re going to leave the door open to alternative theories, we need to use terminology that allows for this.

It is unscientific for Mr. Friedman, or any ufologist, to continue using “flying saucer” or “flying disc” to refer to the great range of anomalous aerial phenomena. It’s time to retire these antiquated terms and reconsider how we label what we can’t explain.