This past June I attended the 2016 Alien Cosmic Expo (ACE) in Brantford, Ontario, which pulled together a terrific panel of ufologists for what was billed as “Canada’s first public hearing on UFOs.” The goal, like that of the Citizen Hearings in Washington D.C. a few years earlier, was to increase public awareness of UFO secrecy, and to urge the government to disclose what it knows about the elusive aerial phenomenon.

The expo’s orientation towards “disclosure” - the official release of all government information on UFOs - follows the dominant trend in ufology today. But I’d like to argue that this narrow focus on government secrecy works to the detriment of scientific inquiry, and slows the advance of our knowledge on UFOs. It is both scientifically and pragmatically ill-advised to rely on government disclosure as a source for truth: one can never assume that the government has the answers, and one could never trust them if they did.

We should shift our focus towards scientific discovery, not disclosure, as a means of getting answers on the UFO phenomenon.
​

Overall, ACE 2016 was a terrific success. Some of ufology’s finest were among the crowd: Paul Hellyer, Richard Dolan, Travis Walton, Grant Cameron, Steve Bassett, Nick Pope, and the one-and-only, Stanton Friedman. Each was given a chance to state their case to a panel of outside journalists, writers, and media representatives, and to respond to questions that they posed.
​
Together, the speakers; provided a broad-strokes overview of government UFO research, both public and classified; highlighted some of the major documents suggesting the existence of a coverup, and; speculated on the extent of our leaders’ knowledge of UFO secrets. Their knowledge on these subjects was considerable, and the facts that they presented were significant. Every member of the table, and particularly Bassett, the godfather of modern UFO disclosure, exemplified the value of speaking truth to power through Freedom of Information requests and the critical questioning of our political leaders.

So assured were they of the value of their work that none of them but Pope seemed to have acknowledged the challenge posed by a PhD student on the media panel. After a particularly disclosure-heavy round of hearings, the student observed that when activists are told that their allegations are off the mark, or that the government has nothing to hide, they reject these “false” disclosures as misinformation. They hold out for “true” disclosure, defined as nothing short of full confirmation of their beliefs. How do we break out of this unfalsifiable, circular thinking, she asked, and move down a more productive avenue of inquiry?
Stephen Basset's remarks at the 2016 ACE, followed by a Q&A. The panel question discussed above begins at 16:31.
Bassett scoffed at the question, pointing to the usual declassified documents as proving the existence of a deep, and as-yet undisclosed government secret. Pope, the former Directorate of Defence Security and UFO desk officer for the British Ministry of Defence, was the only one to really take seriously the challenge implicit in the student’s question: is disclosure just a waste of time?
​
In his own response, Pope freely acknowledged the critical flaw in the disclosure agenda: namely, that it assumes as its starting point that the government does indeed have something to disclose. It if doesn't, of course, then the movement couldn't possibly achieve its goal of making them disclose it.

Perhaps Pope was most willing to acknowledge the flaws of the disclosure movement because he, like several prominent ufologists today, does not believe that the government is covering up as much as we often assume. Pope recognized the MoD’s fundamental dishonesty in insisting that UFOs were not of defence interest while they actively engaged in research behind the scenes. But Pope insists that the PR front - one very similar to USAF’s own - was only a means of deflecting media inquiry and escaping public accountability for chasing after UFOs. ​

In other words, the government was lying, but they weren't hiding any answers on UFOs origins: only the embarrassing truth that they, too, were looking for an answer that they couldn't find.

This was exactly the point that was made by retired Colonel. Dr. John B. Alexander in his book, UFOs: Myths, Conspiracies, and Realities (2012).(1) Alexander investigated UFO secrecy from within the government during his extensive career in military intelligence, and found next to nothing to support the contention that a secret cabal of US military men are hiding the evidence of extraterrestrial visitation. Any apparently pernicious attempts to discredit UFO research - the Robertson Panel, or the Condon Report, for example - were made primarily in an effort to keep people from asking questions the government couldn't answer, and making demands the government couldn't meet.

And why should we assume that secret government research has turned up anything that public research hasn't turned up already? “Hard” evidence for alien visitation is notoriously elusive, and whatever intelligence is behind it clearly has no interest in making itself widely known. What could the US government possibly do to drag it out into the light?

Many, of course, would insist here that the “aliens” have made a back room deal with the US government: that they have traded knowledge and technology for free access to abduction victims, or something to that effect. To fully refute this idea would take an article of its own, but suffice to say that the UFO and alien phenomena are decidedly apolitical - manifestly, at least - and seem to prefer selective, personalized interactions over institutional arrangements. Why should we assume that an intelligence so obviously advanced - an intelligence capable of altering our spacetime at will - would have any need to make secret pacts with our heads of state, or cooperate with their national security agendas? 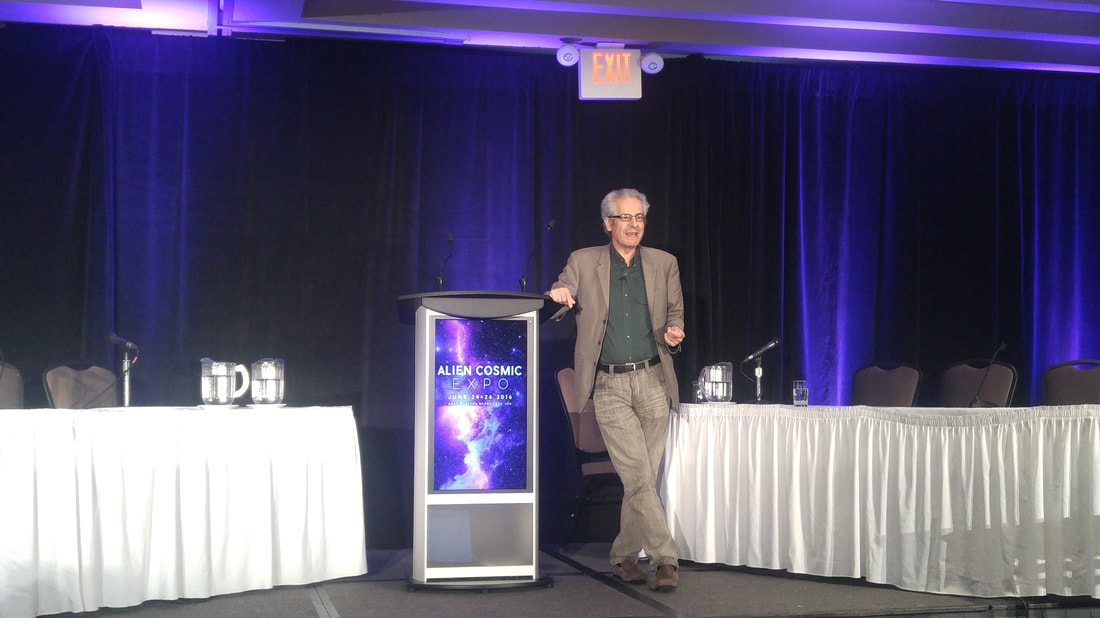 Nick Pope, former Directorate of Defence Security and UFO Desk Officer for the British Ministry of Defence, speaking at the 2016 ACE. Image is the author's own.
A Hopeless Agenda

Moreover, there seems to be a massive problem with falsifiability inherent in the disclosure agenda. If disclosure activists are right, then it would be easy enough for the US government to confirm this. But if they’re wrong, it’s hard to imagine any government proclamation that would convince them of this. How could any administration (especially one so strongly accused of dishonesty as the US government) with nothing to disclose ever convince everyone that it really has nothing to disclose? Any statement from a government source could be called a lie, and who’s going to convince a bunch of conspiracy theorists that it’s actually the truth?

The only statement that disclosure activists would likely ever accept would be one that confirms what they already believe. Unless they’re told they’re right, then some activists, at least, will carry on fighting the government forever, practicing a hopeless exercise in self-validation. Whatever statements we get from government, there will always be someone crying “coverup!” and holding out for “true” disclosure.

Not only is it unlikely to succeed, disclosure is a distraction from more productive efforts to explain the UFO mystery. By focusing so exclusively on disclosure, we are neglecting scientific investigation into the UFO evidence that’s already freely available to the public. Why ask the military for answers to questions we normally ask of the academic community? After all, we’d never consider the Air Force a reputable source for information on any other scientific topic.

Clearly we’re barking up the wrong tree. Academics and private researchers are much better equipped to explain the origin of the UFO phenomenon, and they can do it with or without government help.

I absolutely support the efforts of disclosure activists like Bassett and Cameron, and I am extremely grateful for the efforts of the Alien Cosmic Expo organizers (I had a great time!). Activists have rescued a impressive number of government documents from a fate of eternal secrecy, and events like the ACE are how they share what they've learned with everyone else.

But we should not be focused so exclusively on government disclosure that we forget that there’s still a great deal we can, and should, learn about the UFO phenomenon through channels outside the U.S. government. Even if it’s true that there’s a top secret team of scientists investigating UFOs deep within the underworld of the U.S. military, there’s no reason to think that they’ll find something we can’t find on our own with publicly-funded, peer-reviewed research.
​
No authoritative proclamation could ever take the place of scientifically-verified fact. There’s a lot we can learn by questioning our governments, but we should always keep in mind that the truth about UFOs will ultimately be discovered, not disclosed.